On February 16, 2016, Part 3 of the Hydrogen Challenge #1 consisted of only 77 kilometres from Stuttgart to Karlsruhe, both Baden-Württemberg, allowing to top up on hydrogen as the next stop Duesseldorf was another 365 kilometres away. 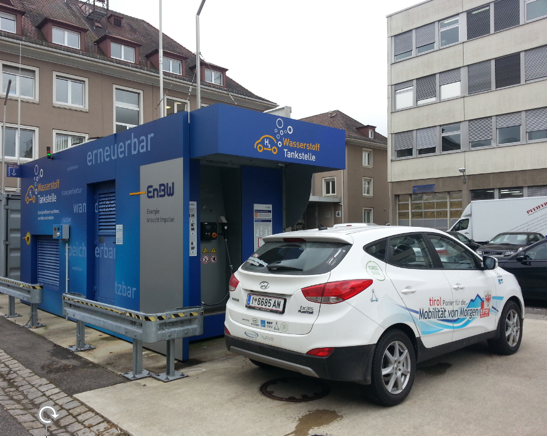 The 2nd leg from Stuttgart to Karlsruhe was a short stretch on the German motorway but gave no opportunity to drive at a faster pace since the next (at that point in time operational) hydrogen refuelling station, in Duesseldorf, was estimated to be 414 km away from Stuttgart.  Less the 77 km between Stuttgart and Karlsruhe, the remaining distance from Karlsruhe to Duesseldorf was still 365 km.  Therefore, it was good to be on the safe side.

The container-like hydrogen refuelling station is located in the inner courtyard of the utility copmany EnBW, and operated by same, but available for public use, with the exception that you can only pay with the CEP-card.  The representative of the company, being so kind to show me the procedure, allowed me to refuel, and I subsequently registered for such a card.  Basically you key in a PIN (see 1st picture below) and then you are all set to go.

At this stop, I noticed two peculiarities:  The bent pipe on the roof (2nd picture below), which the gentleman said, was to let off any miscellaneous hydrogen atoms into the atmosphere that did not go into the tank of the FCEV while refuelling, hence a staccato hissing sound between two blinks of the eyes, and water coming out of the exhaust (3rd picture below) in vapour form, which had accumulated from the fuel cell and was discharged by the system.

Did you spot them all?