In Hamburg, the public transport company Hamburger Hochbahn AG runs different types of alternative propulsion on the “Innovationslinie 109” to test which option could work for the future.  On May 26, 2017, I got on at Alsterdorf and rode in a Diesel-electric hybrid bus going to Dammtor Bhf (rail station).  Later, I went back the same route and got a ride in the fuel cell-bus. 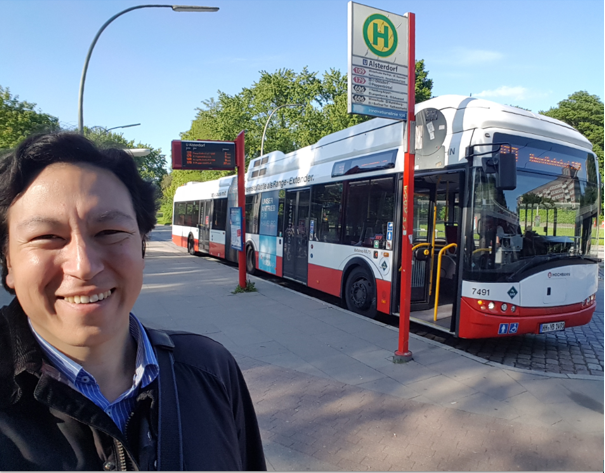 There are four types of alternative propulsion that the public transport company in Hamburg is testing for several years as I am writing this; probably continuing until 2020. 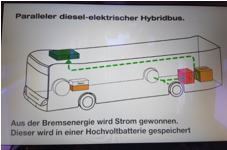 The Diesel-electric bus mainly uses the combustion engine, but at lower speeds also the electric engine.  Excess energy from braking is re-couped and stored in the battery. 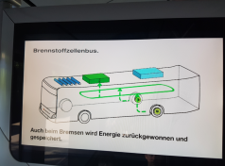 The fuel cell-bus carries hydrogen in the tanks (on its roof) which is fed to the fuel cell and together with oxygen creates electric power for the eletric engine.  Excess energy from braking is equally re-couped and stored in the battery. 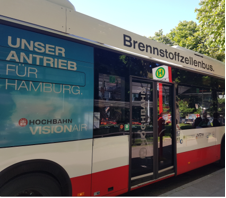 The fuel cell-bus says “Brennstoffzellenbus” on it; it is manufactured by SOLARIS. 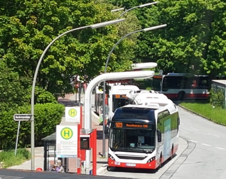 Furthermore, pure-battery-electric buses as well as electric buses with fuel cell-range extender are also being tested.  I did not ride those yet.  The batteries are charged by the white overhead arms at specific bus stops (as seen in the picture). 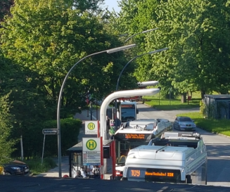 These are three articles (in German) for further reading:

If you are going to Hamburg, look out for this sign (the last line in blue with the number 109) Bus information: 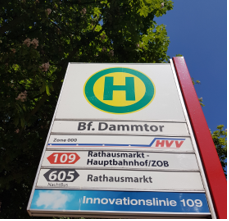 Actually, the occasion to be in Hamburg was for something else, but the hydrogen bus ride was immaculate.

For any information not correct or changed, please let Mortimer #HydroChan kindly know.