Winter tests are nice when there is enough snow.  Of course, it does not make sense to first drive fast and then brake like mad, but it let’s you get to know the wheels under your feet a bit better.  On the occasion of the SIX SENSES-wine tasting at Schloss Gobelsburg, Kamptal region in Lower Austria, the purpose was to visit some of the wine fields, before the wine-tasting, and then the snow was just too good to not test that as well.

Hello, I have once noticed with cars with electric engines that the snow on the bonnet does not melt.  My name is Mortimer #HydroChan, and I like to find out how good and how safe ELECTRIC CARS are in Winter time.  It does not matter if they have a fuel cell onboard or only a battery.  If one has not tried it, then one will not know.  I tried the Hyundai ix35/Tucson FCEV several times in Winter time in Norway, Slovenia, Czech Republic, Germany and Austria.  The below short account summarises some features I noticed on the Hyundai Nexo, the new electric hydrogen car, during my trip from Vienna to the Kamptal region in Lower Austria and particularly the snowy wine fields South of Gobelsburg. 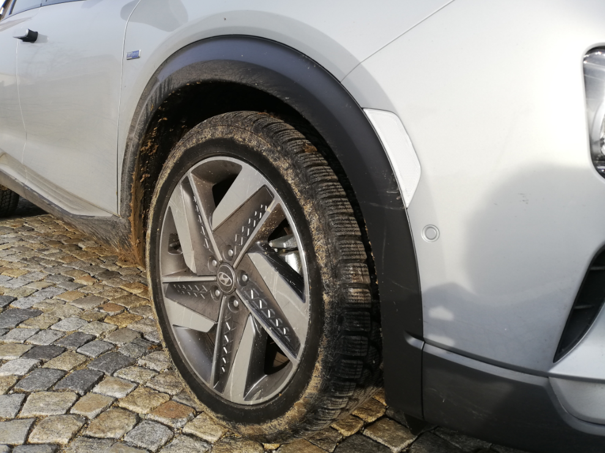 Electric engines generally bring the entire power onto the wheels at once, and this can, on slippery surfaces, be something drivers of normal cars are not familiar with.  What you do is, that you apply the BRAKE PADS behind the steering wheel, as seen in the picture below, with your fingers, and you have three levels to increase the resistance on the wheels, with the highest level (left pedal) recuperating most of the possible energy when the car slows down.  On the side, I wonder if in countries with right hand-steering the pedals swap sides or not. 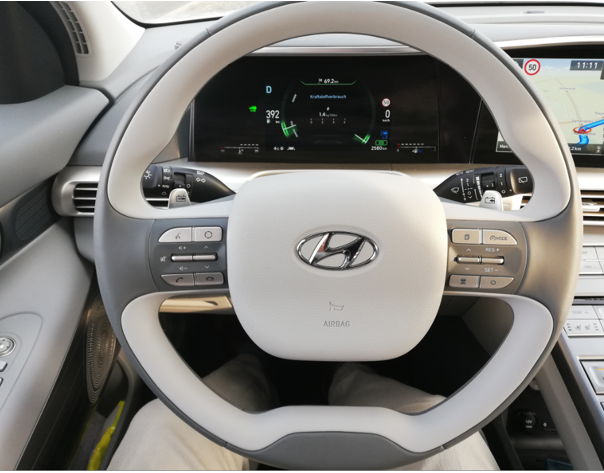 A useful feature on the Hyundai Nexo, apart from the cruise control which I like most, for Winter is probably the HEATING FOR THE STEERING WHEEL.  By the press of a button, the steering wheel heats up to a cozy level, as can be seen in the picture below; steering wheel with three wavy lines going up. 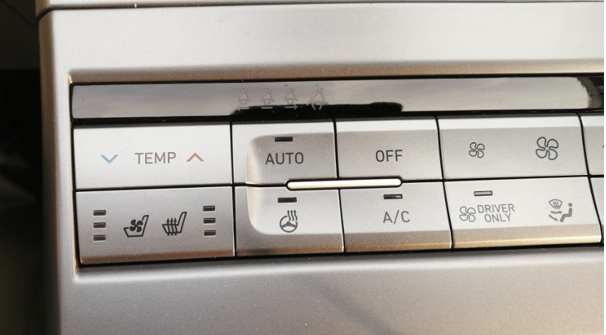 The Hyundai Nexo is said to have TWELVE CAMERAS or so mounted on the outside of the car.  I did not count them and I could not find all of them (yet).  In either case the screen is divided into three screens and the right hand screen shows a 360° view around the car as seen from the top, as in the picture below, while the middle and left hand screens show the sides of the car, such that one can even see the front wheels turning; like a donkey can see all its four feet.  This feature works mainly in reverse, but as you change to forward “Drive”, the cinema still stays on at low speed, which was very helpful of course, especially when the paths became steeper and narrower. 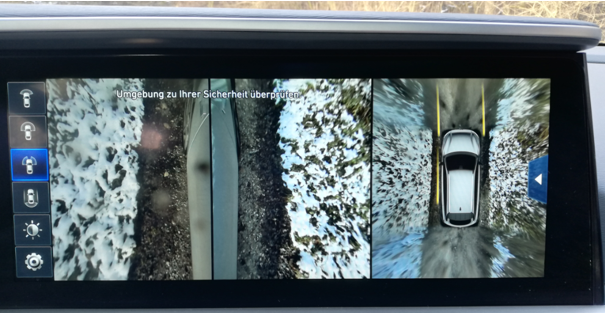 The EXTREME BRAKING TEST (as I venture to call it) was amazing.  The braking distance until the Hyundai Nexo came to a standstill was incredibly short to my surprise; somewhat inherited from the Hyundai ix35/Tucson FCEV but even better.  And, the whole car did not even wiggle nor jiggle or giggle, keeping its track in line.  However, every braking situation, needless to say, is completely different and unique.  In the below picture, the right hand wheels were completely on an icy track, and the left hand wheel were on snow and partial sludge.  It was the same experience, the car stayed in the same line.

The most narrowest of paths (for my taste) were chosen to reach the top of the little mound where the lookout “Aussichtswarte Gobelsburg”, as in the picture below, was situated.  And these paths between the wine fields had WALLS OF EARTH HIGHER THAN THE CAR ITSELF left and right, branches and twigs of bushes pointing dangerously close to the windows.  The ground on which to drive was slippery.  The push uphill by the car was strong and solid and the wheels just revolved in a controlled manner; no unbalanced situation and not a single overspinning at any point at all.  Wow!

From the outlook (tower) looking down, it was a unique chance to observe what the Hyundai Nexo looks like from above; see picture below.  Since I greatly missed a SUN ROOF on the Hyundai ix35/Tucson FCEV, finally there was one on the Hyundai Nexo.  Hooray!  I took another picture of the sun roof when I joined the Hyundai Nexo presentation in Munich.  On dark or foggy Winter days, it is nice to get more daylight from the sky in, or city lights at night as the case may be; well done.

The LOUDSPEAKER in the inside of the door, as below, reminds me that I forgot to turn on the radio.  That is something I always do when I am on the road, and on my Road Trips I need to hear the traffic report.  But, I seemed to have been so consumed with so many new functions and features of the Hyundai Nexo for those few hours, and I guess I still need more time to grasp this CAR OF THE FUTURE. 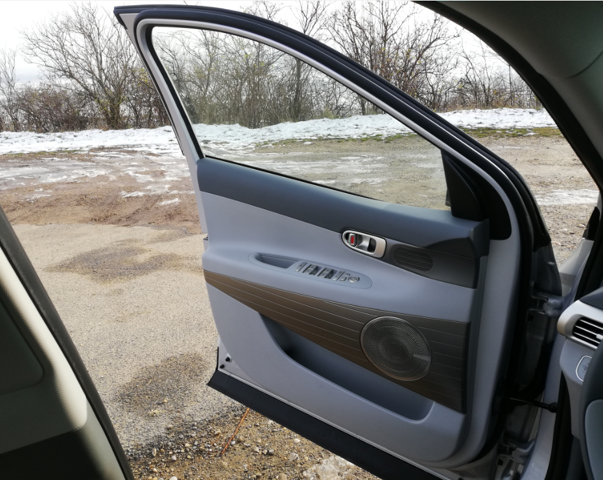 I had tested the BACK SEATS of the Hyundai Nexo back in April 2018 in Hannover.  You notice the extremely side body of the Hyundai Nexo.  As with the predecessor, the Hyundai ix35/Tucson FCEV, the belt for the middle seat comes from the same spot from the ceiling inside the car.  On a next Winter Test, it would be good to get people sitting in the back, or even take pets in the trunk or fold down the back seats. 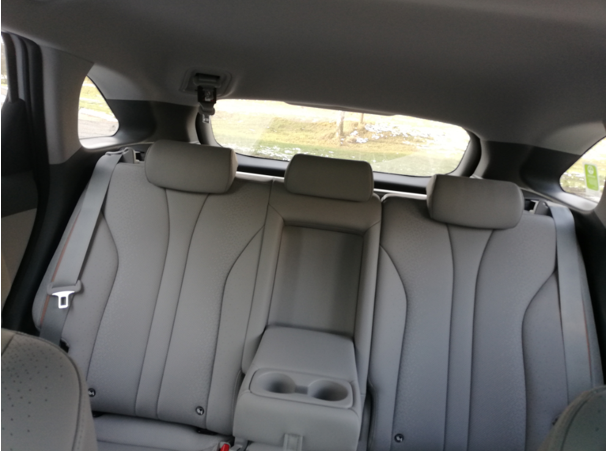 Finally, what this Winter Test made clear is that cars with electric engines FOR MY TASTE have generally too much power for precarious situations like a narrow and slippery road, and that the Hyundai Nexo has behaved very good in such situations in the snow.  THANK YOU Hyundai Austria for the great opportunity to test this vehicle.

For further information about the Hyundai Nexo, this is a good link: