Taking the new Hyundai Nexo electric hydrogen car to Schloss Gobelsburg, Kamptal, Lower Austria just in time before year end.  Continuing the SIX SENSES tours with more Grüner Veltliner wines of Schloss Gobelsburg distinguishing this time between the different vineyards, near and far.  On the way, I refuelled the car, tested the brakes, learned about the system onboard, did some Winter driving in the vicinity and visited the wine field, before actually tasting the wine.

Grüner Veltliner at Schloss Gobelsburg, the two lions and the Austrian and the European flags

Wine drinking, no doubt, has a certain culture.  But, so does the electric hydrogen car have a certain culture.  Why not combine the two?  Driving to a nice place of interest in a futuristic car and tasting good wines is my proposed juxtaposition.  For the 5th time the two lions greeted me, it was the 1st time with the Hyundai Nexo at Schloss Gobelsburg whereas before I already tested the Hyundai ix35/Tucson FCEV and a selection of wines.  This time, I wanted to taste other Grüner Veltliner wines compared to my previous SIX SENSES tours; of course they also have Riesling, but that will be another tour, and after that many many more wines they produce.  And for the first time, I noticed the two flags; I was in Austria and I was in Europe.  Courtesy of Hyundai Austria, I was granted to take the Hyundai Nexo for one day (2018-12-19) to test it and write about my observations.

The day started at 10:26 at Hyundai Austria’s headquarter, and I did an obligatory hydrogen refuelling at the OMV station Shuttleworth Street No. 10, 1210 Vienna Floridsdorf, which was 22 kilometres (13.7 miles).  2.15 kilograms gasous hydrogen (GH2) were refuelled, and the temperature measured 4° C (39° F).  The habit is similar to gasoline refuelling except for that you do not hold that trigger handle on the nozzle, but instead you click it once to lock tight the nozzle to the car, and then you press the green button on the pump.  As there is gas (the hydrogen) being filled into your tank, you hear short hissing sounds and a kind of hammering from one of the big machines behind the wall.  And, after two to three minutes it is all over, and you go into the shop and pay.  I encountered a kind gentleman from OMV who was just supervising a tank waggon bringing gasoline to the station, and as it turned out he had previous experience with hydrogen driving as well.  He was so kind to take the picture of me, as can be seen below.  Thank you, Mr. B. 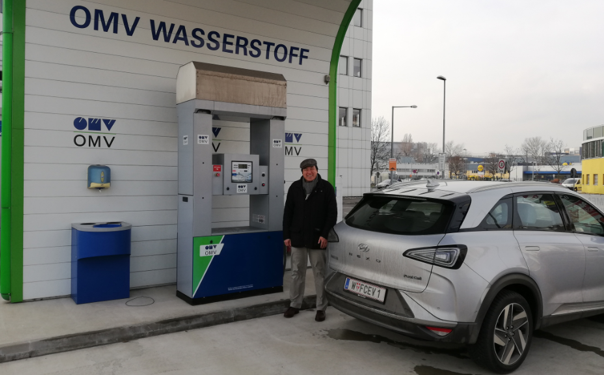 While I had the pleasure to test-drive the Hyundai Nexo briefly in Hannover (April 2018-blog), this tour to the vineyard Schloss Gobelsburg, led by the Family Moosbrugger since 1996, gave me the opportunity to get to know the new electric hydrogen car by Hyundai a bit better, and in order to get to know the different wines of Family Moosbrugger and their team a little bit better as well.

Hi, in case you don’t know me, I am Mortimer #HydroChan, and I write and talk about my experience with future mobility.  My profile is normally to drive long distances or test public transport, reach a cultural destination, such as the vineyard, in an electric car or test such vehicles during Winter time.  During the stretch of 68 km (42 mi) from the hydrogen refuelling station to the chateau, I instantly recognised the extremely responsive brakes that I was already well accustomed to from the predecessor model, the Hyundai ix35/Tucson FCEV (since my learning to drive an electric hydrogen car back in 2014). 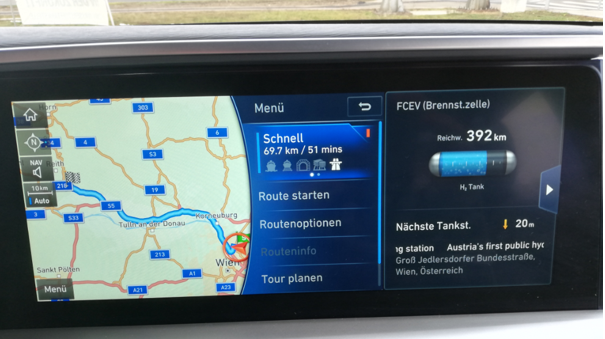 Next, the computer screen in the centre of the cockpit is a multi-functional information device, as in the picture above, which among others showed to me the route I was intending to drive to the chateau and how long it would take at the average speed on motorways and national routes.  On the right hand side, the remaining range of the hydrogen tank was indicated as well as the nearest hydrogen refuelling station away from my current location.  Apart from the monitoring aspect, this screen also has command functions which I shall, however, delve into on another occasion.  After driving for one hour, I arrived in the Kamptal, the part of Lower Austria, which defines the wine-growing region where the chateau Schloss Gobelsburg is situated and the maximum outreach where they grow their grapes for the wines they produce.

The Kamptal is surrounded by nice rolling hills in the Northern part, i.e. those grapevines are growing towards the Sun facing South.  Before beginning the wine tasting though, I wanted to first visit some of the spots where the grapes usually grow, but which of course were already harvested by the chateau a few months back in late Summer.  So, I drove the Hyundai Nexo on some snowy and icy paths, intentionally revving up and braking hard, and was generally satisfied (read more in the Winter Test Kamptal-blog).

Particularly, I took a look at the reed Steinsetz, which can be seen in the picture above, and which was pretty close by the chateau and accessible by private car.  There is also a significance that I was intrigued about:  in some of the chateau’s wines, only grapes from a specific reed go into the bottle, whereas in other cases the grapes from two or three reeds may go into a certain bottle, and in yet another case the grapes from the entire Kamptal region can all find their way into one bottle as well.  You can actually taste the difference, and I did.

In 2005, I learned in a wine course that you can mix two, or even three, different types of grapes and call it a cuvée.  But this was not the issue with the Grüner Veltliner grapes growing on different fields in the Kamptal region.   As can be seen in the picture above, going from left to right, the first bottle is called Kamptal because the grapes in that bottle originate from various wine fields in the region Kamptal.  As a result the wine seems to have a relatively light feeling in the mouth, sufficient fruitiness that you can call it a Veltliner, but something more to be enjoyed along with an appetizer made up of vegetables or something fresh, as Mrs. Ilker from the chateau explained to me.  Also, the grapes were sitting in a steel tank for 2-3 months, in contrast to the next two wines, the latter sitting in wood barrels for 3-4 months; i.e. much longer as well.

The bottle in the middle concentrates on only two wine fields or reeds that the chateau’s experts carefully selected, and that may vary from year to year.  I found that very interesting, because of the different soils on which the fields lie.  Some have more sediment, or even bumpy stones, such as in the picture above, which allows the soil in respective case to be more porous and precipitation flows into the ground more easier, the roots of the Grüner Veltliner vines are happy, than say the less porous soil which is better used for the Riesling grape.  On the other hand, the Grüner Veltliner does not require as much Sun as the Riesling grape does.  So, this one is called Langenlois, because the grapes originated from two to three fields in the vicinity of Gobelsburg and Langenlois, which are adjacent to each other.  According to Mrs. Ilker, fried chicken and these sort of seasoned main courses go with this wine well.  In my perception, I definitely found more strengths in this second wine, more acidity and I must say still to my liking.

The bottle on the right was the even more refined Grüner Veltliner, as the grape came specifically from one sole reed, namely Steinsetz, as the label says; also the one particular reed I visited.  Of course, the process to make the wine has its special recipe, but I am applying my senses, just the same as with the future mobility.  And for my individual taste, that was a Grüner Veltliner squared, meaning it had a decent amount of thrust which I must say that I go fine with the first two wines, and that it was amazing to see what difference the soil, among others, can do to the wine.

I remember that last year’s Summer saw unusually many sunny days, but that can be observed in the next season again.   Also, next year we shall be drinking this year’s wine and this year’s Summer was quite strong and long as well.  This year’s Winter has so far seen only few days at below freezing temperatures; not sure if we can influence the climate, but if we are traveling carbon emission-free then that is one plus, but if we were even sharing cars and using more public transport then we might even reduce traffic jams one day.  The Hyundai Nexo is definitely worth a drive to get to know something new.  And to Mrs. Ilker I would like to say “Thank You” for the third wine tasting session with her expertise.  Also the chateau Schloss Gobelsburg may be visited with an electric car, as can be seen in the picture below taken in the courtyard of the chateau; the car behind the Hyundai is a BMW.

Electric cars with and without hydrogen, fuel cells or batteries

Whether one prefers the pure battery-electric car or the hydrogen car with a fuel cell that makes the power with the help of hydrogen, it probably depends on your driving profile, whether you travel daily short distances or sporadically long distances, as in my case generally speaking.  I will always try to find public transport if possible, but there is a certain distance that I like to travel in a car and that starts at 100 miles, and if the train connection is not sensible.   But the mere fact that you can charge an electric car, that has the plug in-feature, at Schloss Gobelsburg gives me pleasure.  Why not combine two different cultures?

As for the return trip, I refuelled at OMV station IZ NÖ Süd Strasse 4 Objekt 9, 2351 Wiener Neudorf, just a stone’s throw South of Vienna, at 3:21 p.m., a total of 3.89 kilograms of hydrogen or an equivalent of 465 bars, as the unit for pressure.   In the picture below, the hydrogen tank of the station is the cylinder on the right hand side and the compressor is inside the container, also on the right hand side.  Just doing the quick maths, I therefore used up these mentioned amounts of hydrogen for the roughly 200 km (124 mi) distance since the last refuelling on the morning of the same day, dividing by 1.24 to get miles then we can say that I used up just over 3 kilograms of hydrogen for 100 miles which works out to be an equivalent of 30 litres of gasoline or below 8 gallons; admittingly this has to completely do with my driving profile as well as the Winter Test, and as one may gather from my Road Trips-blogs, I can also be an absolute economizer, but I just had to test this car.

TO ANYONE WHO KNOWS ABOUT HYDROGEN DRIVING AND REFUELLING:  IF MY MATHS IS WRONG, PLEASE LET ME KNOW, THANKS. 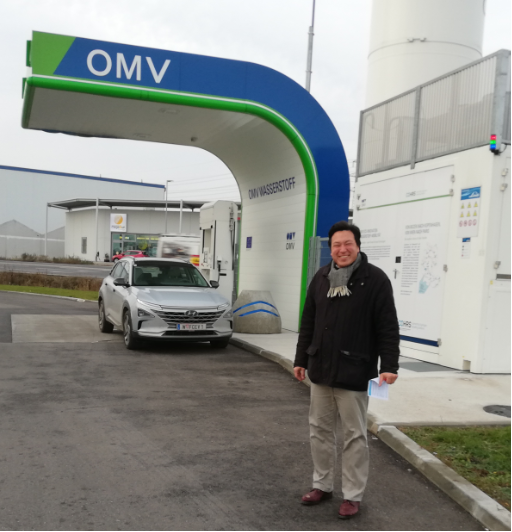 For further information about the Hyundai Nexo, this is a good link: