On 13.03.2019, three hydrogen pioneers drove a Toyota Mirai Fuel Cell-Vehicle (FCV) from the Hessian State Energy Agency #lea to the Energy Storage Europe 2019 Conference in Düsseldorf and to hold a presentation amongst others about the tour.

We officially started driving with hydrogen from Wiesbaden, state capital/Landeshauptstadt of Hessia/Hessen, at 08:13 am to reach Düsseldorf, state capital of North Rhine-Westphalia/Nordrhein-Westfalen, to attend the conference, at 03:00 pm (which later turned out to be 03:28 pm).  As the Toyota Mirai was parked in Frankfurt however, I needed to pick it up first, which I did on the day before (hence I already refuelled it at Frankfurt – Hanauer Landstrasse (SHELL).

Note 1:  On our tour, from state capital to state capital, we were also to cross another German federal state, just briefly, i.e. the North-Eastern corner of Rhineland-Palatinate/Rheinland-Pfalz.
Note 2:  The belowshown times and locations were initially indicative, but meanwhile I updated this blog to the actual times.

The Toyota Mirai was located at Hanauer Landstrasse 429, 60314 Frankfurt am Main at the Toyota dealer Autohaus Nix.  Actually, the car is owned by the Hydrogen and Fuel Cell Initiative Hessen (Thank You for the sponsorship!), and it can be shared by the public through the book-n-drive online platform.  See more info about hydrogen mobility in Hessia as well as more info on the very car itself.
As mentioned, the day before (12.03.2019), I picked the Toyota Mirai (fuel-cell vehicle) up from there, after having arrived at Frankfurt central station, refuelled it, as written above, and then stayed overnight at Hotel Pension Gartenhof in Mühlheim am Main, South-East of Frankfurt.

Pre-Start at MÜHLHEIM AM MAIN early-early

After arrival at Hessen Agentur, Mainzer Str. 118, 65189 Wiesbaden and meeting Markus Lämmer, the crew of the hydrogen tour was almost complete.  We took a group picture, and then officially started our hydrogen tour.  We are people who have expectations, who have senses and we want to have fun. 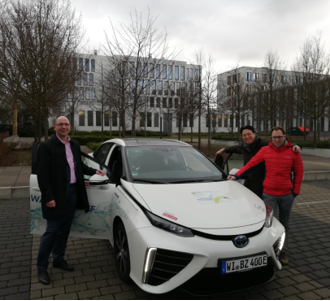 At first, we headed East, which was actually a slight tad back towards Frankfurt.  It was for an important reason: because we wanted to visit one of Germany’s first hydrogen refuelling stations at Frankfurt Höchst, Industriepark Höchst, Tor-Süd, 65926 Frankfurt am Main (built in 2005).

At this very historic station, they offer gaseous hydrogen at 700 bar and 350 bar pressure levels.  In the past, they used to offer liquid hydrogen as well.  Thanks to Markus Lämmer, we met with Dr. Ogriseck of Infraserv GmbH & Co. Höchst KG; he and his team operate and maintain the hydrogen part of the station (after it was built by Linde before), and as it caters for other fuels as well).  We received further explanations, which was absolutely great.
Two Linde representatives came as well and we chatted some more.
And, we were also met by Dr. Heinrich Lienkamp, Head of the Board of the Hydrogen and Fuel Cell Initiative Hessen, and a short interview was held.
During the time we spent at the station, two hydrogen buses by the company Winzenhöler came to refuel there  as well.  And with another Hyundai ix35/Tucson FCEV (from another locally-based car sharing company) showing up to refuel, we were all in all in good company.
The next group photo was taken.

If one thinks back 14 years ago, and asks how many cars and buses that use hydrogen were driving around back then?  Now seeing all this hydrogen activity in the year 2019, it goes to show that everything somehow falls into place.  Consequently, the next question to be raised is:  how will it look like at Höchst station and the hydrogen mobility overall in another 14 years from now, i.e. in 2033?
Just on the side a personal memo:  back in 2016, I had missed to refuel at this very station on my Hydrogen Challenge #1 Innsbruck-Amsterdam and where I had refuelled at Stuttgart Airport instead (which is also one of Germany’s first hydrogen stations by the way, built in 2008).   And while we did not refuel here on this trip, we shall be back …
Nowadays, one can choose from over 60 hydrogen stations or more in Germany, and counting.

Seems we are, already now, encountering no scarcity of hydrogen on this trip, let’s also see that everything works out well during our journey.

After some great discussions, the next meeting point was North-North West of Frankfurt at Limburg, Brüsseler Str. 14, 65552 Limburg an der Lahn.  We were not refuelling there.
Personal note:  I was there in November 2018 during my Hydrogen Challenge #3 Innsbruck-Rotterdam and I met a Toyota Mirai-owner who was refuelling at the station as well, by coincidence.  And, for this trip we had arranged to meet again.

Having some coffee and snacks together and entertaining a nice conversation at our reunion, it was time for a group photo, again, with now two fuel cell-vehicles.  Interestingly, we learned that the hydrogen served at this station was derived from residue of the nearby industry; which is also sensible to do. 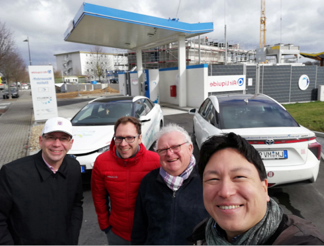 After Limburg, we left the federal state of Hessia and entered the state of Rhineland-Palatinate at its North-Eastern corner, to then enter North Rhine-Westphalia afterwards.

We were on our way to meet the film team, and so-to-say our fourth hydrogen pioneer, i.e. one member of the film crew who would join us riding in our car, and the film car cruising all around us.  We met them at Königsforst motorway rest area.
Just in case we would have needed to refuel hydrogen, there is a station nearby:  Airport Köln/Bonn, 51147 Köln, TOTAL (where I have refuelled before as well).

Admittingly, we were 25 minutes behind time, but had communicated with the film team via sms.  We saw a black Volvo and two gentlemen.  After a short introduction, briefing and verbal rehearsal, we drove in a convoy; reminding me of the film team that rode with me and a dozen other hydrogen cars during the Hydrogen Challenge #2 Bergen-Bolzano in June 2016.

The film team in the black Volvo and our Toyota Mirai were heading towards the city of Leverkusen (North Rhine-Westphalia), heading to the planned refuelling stop, Karl-Krekeler-Str. 2, 51373 Leverkusen (slightly behind schedule), where we were to document the hydrogen refuelling process with the help of the film team.  Hooray!  Thereafter, one of the film team members was to join us as our fourth hydrogen pioneer and interview us along the way about the situation of hydrogen refuelling infrastructure in Germany and about the hydrogen car.

The entire hydrogen refuelling procedure was over in just 2 minutes and 40 seconds, so fast, that we had to repeat the procedure a couple of times, to get it all on film, without actually refuelling again.  Notably, we documented the insertion of the H2-Mobility refuelling card (formerly CEP-card), and punching in the four-digit PIN, as well as taking the nozzle and attaching it to the car’s inlet.  I also briefly talked to the personnel of the station.  Unfortunately, we completely forgot to take our group picture … so I post here my routine selfie, as I do at every hydrogen refuelling station. 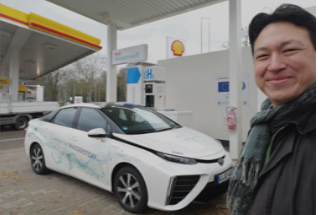 In the Toyota Mirai, we were now four guys, all male, apparently no female this time round; hope that changes in the future.  About Us:  Lars is a cyclist and a European Energy Manager (CCI), Markus works for the Hessian State Energy Agency and provided us the car, Daniel from the film team is our interviewer and Mortimer (myself) is a solutions finder working out a.o. hydrogen business models.  Together we were heading to the state capital of North Rhine-Westphalia, Düsseldorf and the Conference.

And then we were there.  We were heartily received by the organisers of the Conference Energy Storage Europe #ESE2019, and held our presentation at the ESE Forum part of the Conference (as there are three different formats during the three days’ Conference) at 16:05 / 04:05 pm.  Yeah!
Again, we did not manage the group picture.  But, at least our fourth hydrogen pioneer, Daniel Peitz, can be seen in this picture.

This is the link to the video documentary that Daniel and Lasse made:
YouTube, 2:10
0:20 – you see our hydrogen driving on the German autobahn in action
0:56  – we are refuelling hydrogen at the station (Leverkusen, North Rhine-Westphalia)
1:13   –  we are arriving at the fairground; hooray!

With all the alternative hydrogen stations along the way, it would have been symbolically nice to actually refuel hydrogen at Höherweg 202, 40233 Düsseldorf, Air Liquide, as I had refuelled there twice before.
Our presentation was well received.  We were asked by six people from the audience show them the Toyota Mirai outside in the parking lot of the fairgrounds, which we did.  They were impressed, and so were we.

Note on the side:  From when I picked up the Toyota Mirai until arriving at Düsseldorf, a total of 365 km / 227 mi were driven with this car.  I drove maybe half of the mileage, as we took turns.  I was not able to join the trip back to Wiesbaden and Frankfurt after the Conference, as I had another commitment to travel to The Netherlands.  Markus and Lars rode back together with a lady … so, after all.  Hooray!

We would love to repeat this trip at the next event in March 2020 in Düsseldorf.  Let’s see.

Will you join us?

The hotel has a very long history, it is Family-run and I will stay there again and look forward to it.  And, what a great breakfast; an absolute dream.