On a sunny afternoon in the Tyrolian Spring at 02:21 pm, I set off in the electric hydrogen car (Hyundai ix35/Tucson FCEV) heading North to Munich (Bavaria) and beyond that to Weichs for the second time.  Again, I was going to be meeting at Weichs with Armin Schöntag, the cartoonist.  The FCEV was already 6 years old, I would say an oldtimer and the outside temperature measured 19 degrees Centigrade (66°F).  Off I went, together with Frielo the mascot, which I got as a present last time (see Blog “Morning in Weichs“).

In the picture below, there is still some snow to be seen at the Tyrolian-Bavarian border. 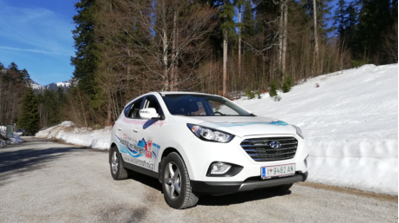 While driving, I was conversationing with Frielo the mole.  We pondered about what the next cartoon could be like, which we would design together with Armin and his other mascots.  On the Bavarian side, I also came across a nice pond.  The picture shows some water in the village of Kleineisenbach in Bavaria.  It was the perfect setting for a hydrogen pioneer to study the topography in a bit more detail than just racing on the motorway which consumes too much energy and should only be incurred when necessary. 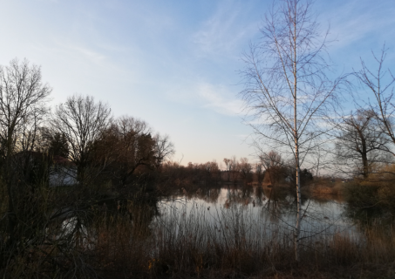 The average hydrogen consumption on the Autobahn was, as before, around 1.5 kg per 100 km.  But, there was a new discovery made:  driving at 100 km/h vs. 150 km/h is not much of a difference in terms of hydrogen consumption.  When you drive a constant speed, then you are not accelerating. Uphill and downhill is a separate issue, as is the case in this part of the World; but in the end it all evens out again.  The temperature on the German side was lowering to 15°C / 59°F, and by the time I arrived at Weichs at 07:00 pm, it was 11°C / 52°F.  I had refuelled hydrogen in Munich; see separate blog (coming soon). 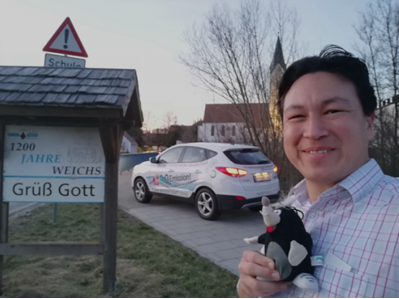 It was a happy greeting as we saw each other again.  We talked during a delicious Italian dinner at the nearby golf club and until late in the night, and to cut a long story short, this is the 3rd cartoon coming from Armin’s pen:
Hitzlifitzli, the fox, is working on a fuel cell of the polymer-electrolyte-membrane type.  HydroChan visits him and the chicken.  They discuss the latest technological developments and the chicken are, how shall we say, a little bit sceptic and at times not all too amused.  They remind Hitzlifitzli that he is an unusual fox because he would not eat the chicken as he cannot stand the sight of blood.  HydroChan on the other hand is having a ball with the chicken every time they see each other. 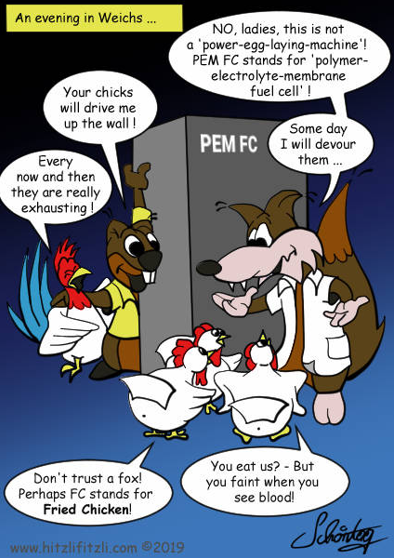 Armin, through his platform IMAGEFIGUREN, and myself through my platform ENERGYTOURS, would like to explore ways together how to express the World of Hydrogen in pictures and with characters, for young and old, for experts and non-experts and for fun, freedom, joy and laughter.  Maybe HydroChan can convince Hitzlifitzli and the chicken one day to come join on a road trip.  Maybe Hitzlifitzli’s very own-built fuel cell will be employed … maybe, maybe.  If we do not try, we will not find out.

With the chicken having to supply lots and lots of eggs for Easter, Armin is already working on the next cartoon.

All hydrochan-cartoons can be found HERE.