On 7 November 2016, Mortimer Schulz, the founder and owner of solutions in energy e.U., undertook a journey in a Hyundai ix35 FCEV (fuel cell-electric vehicle) provided by Hyundai Import, Inzersdorf. The trip began at 06:38 in Vienna driving 14 km to the first refuelling stop at Shuttleworth Str. OMV. 690 bars of hydrogen were refuelled and a range of 507 km was provided at 4° Celsius. After 402 km Lesce (SI) was reached at 12:59 with 111 km remaining range. Mr. Tadej Auer from the Development Centre for Hydrogen Technologies (DCHT), Ljubljana received me at Lesce, Triglav national park. We drove 19 kilometres to Jesenice to refuel at one of DCHT’s founding partners TPJ, Slovenia’s main gas utility company. Refuelling was done from a trailer with hydrogen storage tanks at 200 bar. At 2° C, the new range given was 170 km. The journey continued to Graz from 14:47 until 19:11 (incl. unexpected waiting at Karawankentunnel), with a distance of 190 km; 20 km more than the initial range. It was only made possible due to an average speed of 60-70 km/h. Given snow and fog other vehicles were not driving much faster. Refuelling in Graz was done by the Hycenta Research Centre facility on the TU Graz premises and 360 bars H2 were refuelled at 1° Celsius, giving a new range of 289 km. The last lag to Shuttleworth Str. OMV was completed at 21:40 after 205 km. Refuelling at 4° C resulted in 600 bars of hydrogen and a final range of 434 km shown. The final 15 km were driven to reach home at 22:25. 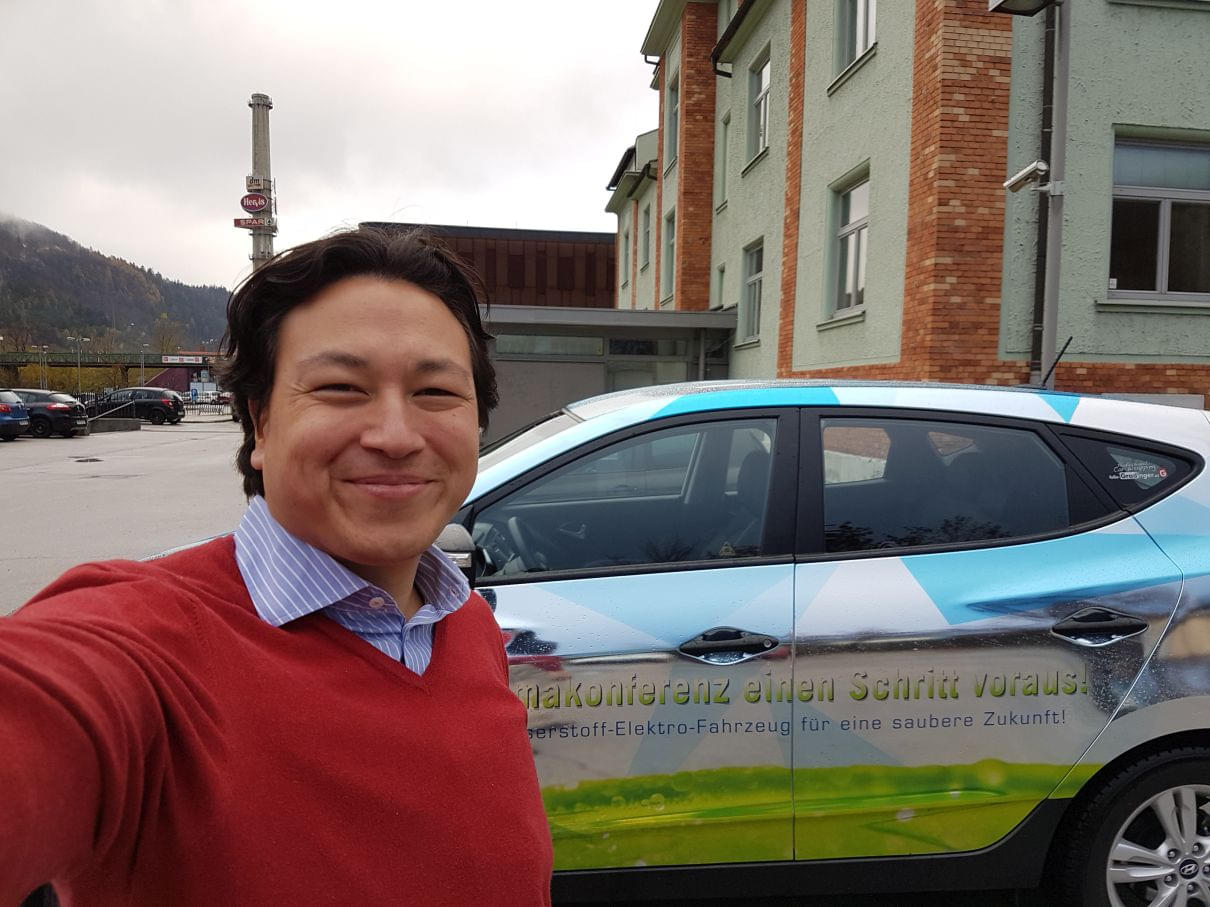 Emphasis during this Winter test trip was laid on the driving behaviour at Winter conditions. From the experience of previous trips, such as Innsbruck-Amsterdam and Bergen-Bolzano, it could be deduced that the cold temperatures did have an effect on the range, but not on the handling of the FCEV. The vehicle performed at all times with rapid response, easy-to-drive and recouping energy for the battery when decelerating to the advantage of extra mileage even in Winter weather conditions.

The ECO-mode was chosen on the mountain roads and the DRIVE-mode on the highways. The ECO-mode is useful when the gas pedal is not pushed excessively. Driving at higher speeds means the fuel cell has to produce more power for the electric engine, and the range reduces progressively.

According to Mr. Tadej Auer, DCHT, the station in Lesce is due to be formally opened in early 2017.