“Today. Tomorrow. Toyota.” one of the slogans says.  After test driving the new 2021 TOYOTA Mirai, my impression is something like: ‘Toyota. Tomorrow. Today.’  As a child I used to imagine what future cars would be like.  Has my future of the past become reality?

The new 2021 TOYOTA Mirai is the 8th FCEV I have tested sofar; I have also tested eight battery-electric cars and three compressed natural gas cars.  In my practical enduser test, I describe my impressions about the interior of the car, also I mention some features that catch my eye and, since I enjoy driving the experience, my observations I can only obtain while driving the vehicle, before I got anything to share.

Solutions that deal with our future and which involve energy are interesting to me.

As the driver, I was sitting in what I would consider ‘sporty’ seats, even though the Mirai is a limousine and not a sports car, and at the same time these seats are comfortable and not too hard.  Then, looking at the dashboard, I see all the usual functions, such as lights, ventilation, navigation and a couple of main buttons.  I therefore found a nice balance, with not too many switches, and positioned in an intuitive way.  Third thing, the exterior design of the whole car is both leaning towards the good old 1980ies as well as showing similarities to current models such as the Yaris and the RAV4.

It seems the 2nd generation is not all that futuristic as the previous 1st generation model; rather the future has become reality in our present time.  The below pictures show the respective cockpits, first of the new model and then the previous model.  Which of the two looks more futuristic? 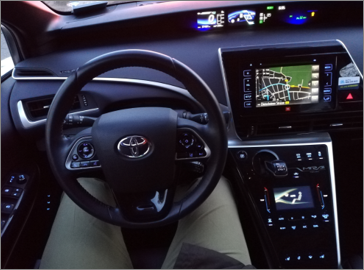 While the 1st generation seemed quite futuristic with spaceship-elements like ‘tomorrow’, the 2nd generation feels more like ‘today’, i.e. the spaceship has landed on our planet.

As I was fortunate to test the Mirai over a period of two days in April 2021, I took it for several mini road trips comparing for example the mileage with the indicated range, as usual.  There are however two factors that I consider, the one thing is how it feels to drive long distances, and the other thing is the fuel consumption, as mentioned, such as asking myself whether I am driving in an efficient way.  Of course, driving longer distances over time will render more data.  Secondly, I am always curious about the features and functions when I sit inside a vehicle, and whether they serve my purpose and needs.  And thirdly, how does it compare to its predecessor model resp. a car brand has many models so where does it fit in, and in further regard: what other vehicles or applications will be possible with the technology.

I drove a total of 243 kilometres in those two days, 151 miles, though some of it, a quarter, was carried out by test driver friends and I was sitting right seat taking my notes.  Thereafter, 400 bars of hydrogen H2 were refuelled, translating to 2.6 kilograms of H2.  As usual, the refuelling time was in line, and it took 2.5 minutes.  In terms of the remaining range indicated, the difference to the real mileage driven is, if I may say so, negligible.  In other words, this is quite accurate, which I find amazing.  The speeds I was going at were between 100 and 130 kilometres per hour on the motorway and the elevation was more or less the same throughout my trip (to the West, North and East of Vienna in Austria).

What I like about cars is the journey aspect, looking out and seeing the scenery.  If there are things to look at in the dashboard, for me it is speed, fuel gauge, temperature, sometimes the navigational aid and from time to time the radio.   Other than that, I am sitting in the car for a longer stretch of time such as a few hours pending where I am going.  So, yes, I think I may say I like a bit of a living room feeling or like an airport lounge.  The functions of this very model are such that I cannot think of what else I would need, at the same time it is not too much and all of it is essential and in further testing I will discover more of the buttons, as that was not yet possible in just two days.

In the 90ies there was another slogan, in the UK, that went ‘The car in front is a Toyota’.  That may be, but what makes ‘it’ a TOYOTA?  I like commonality among the other models of the same brand.  I like tradition, history and where you see that some things from the past have been kept and carried forward while other parts of a car have been re-designed, and yet you still have the identity of the past history and at the same time are being presented the future.  Well, the new 2021 TOYOTA Mirai does fulfil exactly that.  Interesting.  It is the logical step following the Prius legacy as well.  Leaves me curious no less to imagine what the 3rd generation may then be like …

As I do like to say:  I invite you to take a ride, if you have not done so.  Visit the new technology and find it out with your own senses, and I look forward to exchange with other Mirai drivers about their views.  Thank you for reading.

Blog – A German Road Trip with the previous TOYOTA Mirai (2019)